Alan is a web developer and musician, born and raised in Fort Wayne, IN. His mother was a folk signer; active from the 1970's - early 1908's. The sound of his mother playing her 12 string and signing folk songs was a constant in his home for as long as he can remember. His passion for music is rooted in those memories. As an adult, he has performed in multiple local bands, been featured on several recordings, and worked with various local music staples (FWM, Whatzup, etc.).

Near the end of 2003, Alan moved back to Fort Wayne after graduating college in Florida. Wanting to jump back into the music scene, he joined the FWM forums shortly thereafter. Over time, he started helping out here and there with graphic and web design. The end of 2005 brought on various FWM staff changes. He gradually started taking on more responsibilities, and eventually took over management of the site.

Currently, Alan is married with 2 teenaged girls and works as a web developer for a local advertising agency. In his spare time, he enjoys writing and recording music in his home studio, sculpting, and tinkering with electronics and IoT projects.

From radio to restaurant and back to music. I have a passion for music, especially the local scene, after spending a year on the air with local alternative station 96.3 The Edge as 'Danger Boy' with Doug St.John in the afternoon I left to pursue my dream of owning a restaurant. Shortly after opening the restaurant I felt the need to be in touch with radio, local music, and everything I loved about this 'scene', but with long hours and early mornings it was tough to make it out to shows like I had in the past. A solution was brewing.

My other passion in life is computers and had recently had high speed DSL installed in my home. One night while working on some things in my office an interesting idea came to me...internet radio on a local level. I immediately began researching and digging on the web. A few hours later I had figured out some simple web hosting and using Shoutcast was able to stream a copy of a local CD that I had. The next steps and the ones that bring us here are reserving the name 'FortWayneMusic.com' from an online registrar and building a simple website that people could use to access my large collection of local music. Suddenly I was back in radio and loving every minute of it. Many years of hard work, outages, up and downs, months of stagnation, and many many staff members later...here we are.

This site is a vision. A resource, on a local level, for hardworking musicians that have entertained me countless times. A way to pay them back for everything they have given me. Enjoy... 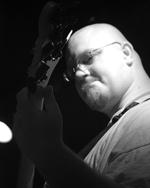 Brad Jones joined the fortwaynemusic.com staff in 2007 after being an active member of the site for 5 plus years. Brad is an active local musician, having played bass guitar for several local performers and bands and is currently a member of White Hot Noise, a Fort Wayne funk/rock jam band. He is married with one child and enjoys playing fetch with his boxer-mix dog, Molly. He is a member of Fellowship Missionary Church where he also plays bass guitar on the worship team. Brad is also passionate about motorcycles and hopes to begin riding again soon. He enjoys discussing all things political and religious in nature.

Brad is a graduate of Indiana Wesleyan University with a Bachelor’s Degree in Management and a minor in Music Performance. He is currently searching for new employment in his field. Brad teaches bass guitar lessons and may be reached at (260) 602-5448, bradjones_bass@yahoo.com, or visit him at www.bradjonesbass.com.